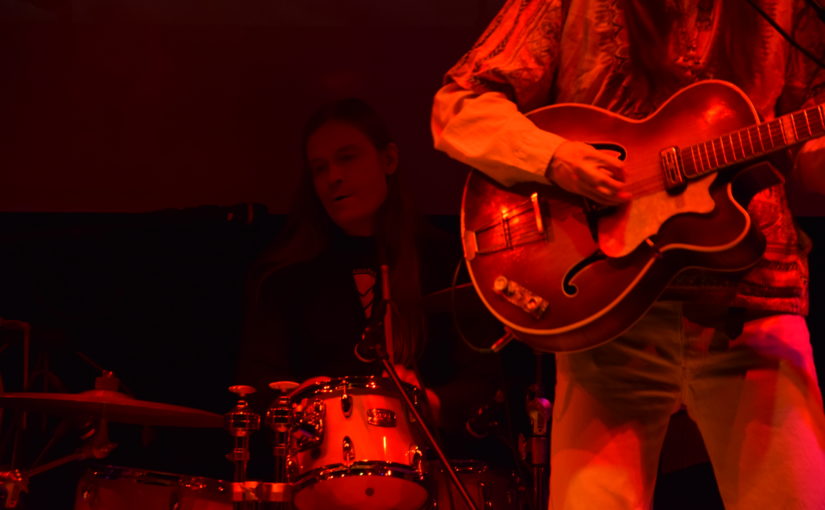 Klava was born in 2004 in Helsinki. The core of the band has always been a trio where drummer Henri Tuomi and guitarist Kalle Kuisma have been complemented by a bassist that has changed a couple of times over the years. In Klava mk I, bass was played by Vesa Partti, a talented musician and composer whose own instrument is the guitar. In the early stages, the gigs sometimes featured guests Ylli Takalo on the moog synthesizer and Rönkko siblings Leevi on guitar and Tuli on vocals. From the start the Klava gigs were staged with VJ and fluid projection visuals by Random Doctors and Valovirhee collectives.

After Vesa quit Klava to concentrate on his own music with his Sadkarma and later Tuliterä bands, Klava’s new bass player was – Klava’s current flutist – Ayhan Akgez, and shortly after Tommi Karttunen, who was better known as a drummer from the reggae group Surviainen. While Henri was studying at the Art School in Tallinn, Samuel Leminen filled in playing drums. Klava mk II trained in the Vadelma music and art community Basement of Lönnrotinkatu in 2006 and 2007, until the premises had to be emptied during the renovation of the property. Klava took a break and Tommi left for India, never to return. He drowned in the River Ganges in spring 2008.

There’s a road to the edge of the Forest

Klava mk III was born when guitarist and multi-instrumentalist Joonas Hietala joined the band as a bassist in the autumn of 2008. With regular rehearsing and active giggin as Klava’s playing evolved into more flowing, steady and swinging, also saxophone player and multi-instrumentalist Sini Palokangas joined the group. The new Klava sound began to take shape – the musical natural talent of Joonas and Sini added more tonality and melodic richness to the songs.

The band’s music has always been flexible and breaking its own limits. Klava Mk III line-up also made improvised gigs with, for example, Butoh performances by Teatteri Olemus. When another saxophonist, Jussi Hurskainen, joined, a handful of songs began to be ready for recording. In December 2010 we went to a rehearsal space studio called Barker in Turku for ten days, and recorded nine tracks for the album. The most recent songs were instrumental Yoga and the album’s title track Polku (Path), which took shape as the recordings began. The main recording engineer was Joonas with the help of the rest of the band. The intense and effortless sessions were completed during the winter solstice.

In the winter and spring of 2011, recordings were continued for string parts in Helsinki, violinists Jarno and Aya Koivunen played the violin parts, mostly arranged by Joonas. The album covers were made by Saara Piispa, who made two fine pictures with her distinctive style. Klava took a break from performing except for a few gigs. Joonas started to be drawn by his own projects and plans and when he left the band in the spring of 2012, Klava went to sleep and put the album on ice.

To the light of the Stars

It took a couple of years before Kalle managed to get a hold of the computer and software he needed to continue recording and mixing the album. In the summer of 2014 Kalle was a resident artist at a house of his friends Tuulia Kasonen and Roope Laasonen, in Vihtari – in the silence of the countryside, under bright stars. There, the album started to breathe again and the tracks were added with guitars, vocal parts, percussion, sound effects and more. The host family of the house, along with their daughter Sorja, also participated in the recording with handclaps the beat of the song Tuulille.

Klava, or Henri and Kalle at this point, was looking for a new bassist, and Veikka Pohto, a great bassist, tried out, but the schedules didn’t quite match. Jussi had left for Joonas’s projects and Sini had moved to Vehmaa so the horns was gone. Klava Mk IV began to take shape when Pekko Sams became the bass player.

The album progressed slowly. In the spring of 2015, Kalle again was a resident artist, now at the old elementary school of Rasi, where mainly new material was created. The beginning of the musical collaboration with Meri Hietala, who played violin parts on Kalle’s new songs and later the same year also pirunviulu (devil’s violin) and vocals on Klava’s album, was significant for the album and Klava. The following year Meri also visited Klava’s rehearsals, but it still took a couple of years more before she actually joined the band.

Klava played a kind of comeback gig at a festival organized by Vadelma in Sipoo in October 2016. The band was Henri, Kalle and Pekko, featuring Leevi Rönkkö on guitar and Susanna Salama on saxophone. The band continued their active rehearsing and the line-up gained new edge with the addition of brilliant folk musician (and mother of Pekko’s children) Ringa Koskinen, who quickly found her place in Klava as a singer and playing jew’s harp and overtoneflute. The motivated new line-up was in full swing when the band was joined by Ayhan Akgez (flute) and Susanna Salama (alto saxophone). However, Pekko’s personal life challenges also posed challenges for the band’s advancement, so at the end of 2017 we asked Tomi Lassi, a bass player who has had a common history with Kalle since the 1990s from a band called Relayer. By that time, Tomi had already collaborated with Klava playing the cello part for the song Tähtien valoon on the album.

Do you imagine an audible landscape?

During the years 2017-2018 we recorded and added Ringa’s vocals and jew’s harp for all of the tracks, plus flute parts by Janina Lehto, harp parts by Heikki Puska. Jarno Koivunen recorded some great violin and electric violin tracks. The band’s newest members Ayhan and Susanna also recorded their own contributions to the album.

In 2018, Klava’s came together first to play a gig at Maunula House on March 3, 2018 with the new line-up featuring Heikki Puska on keyboards. In the audience of Maunula House was Jarno Koivunen, also Kalle’s bandmate from Relayer and before in the 1980s, who decided to join the band and was already on stage on the next Espan lava gig. Heikki Puska attended all of this year’s gigs, but then dropped out of the line-up. Sini Palokangas joined with the saxophone for a gig in Turku, which was natural and energizing for the whole band. Meri Hietala joined Klava on the band’s second gig at Maunula House on November 9, 2018.

From out of nowhere a soft Bridge appears

The recordings were finally finished and Eclipse Music – a jazz and prog label from Tampere, Finland – showed interest in releasing the album. The mixes were finalized by the band by the summer of 2019, after which Joonatan Kotila made the final adjustments to the mixes before the album went on to be mastered by Jasse Kesti. The album covers were made from the drawings by Saara Piispa as front and back covers, and Sisko Pajari designed the rest of the cover art for CD and LP releases.

The only gigs in 2019 were a big gig at the Four Winds Association’s One is our Earth concert in Malmitalo, Helsinki and a gig at Roope and Tuulia’s wedding day party with Pekko Sams on the bass stage for a long time. Klava played with a special semiacoustic line-up at the album release ceremony at Myymälä2 on 15.11.2019.

In 2020 Klava will be playing occasionally, making new music and releasing music videos from Polku album.